Saqqara and Memphis tour from the Airport

Discover the monument that was built 200 years before the building of the great pyramid in Giza, Saqqara Step Pyramid of King Djoser and the most ancient capital of Egypt during the old kingdom 4800 years ago with this Saqqara and Memphis tour from the Airport. 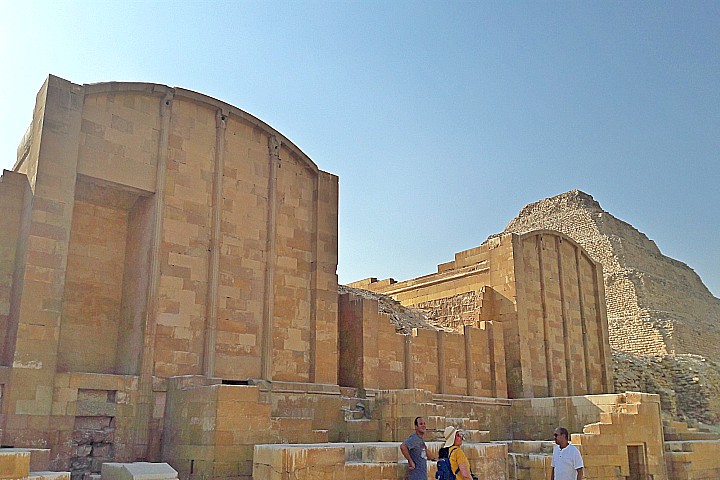 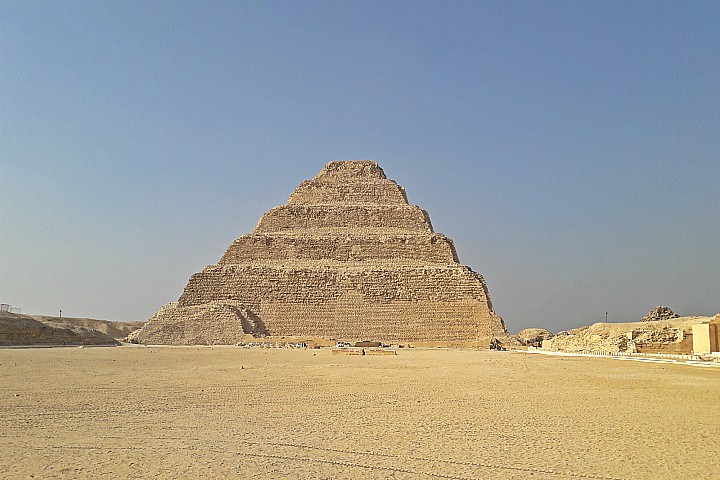 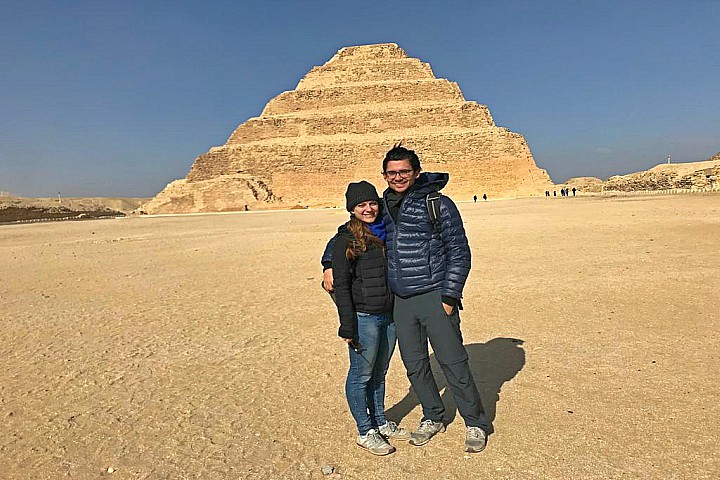 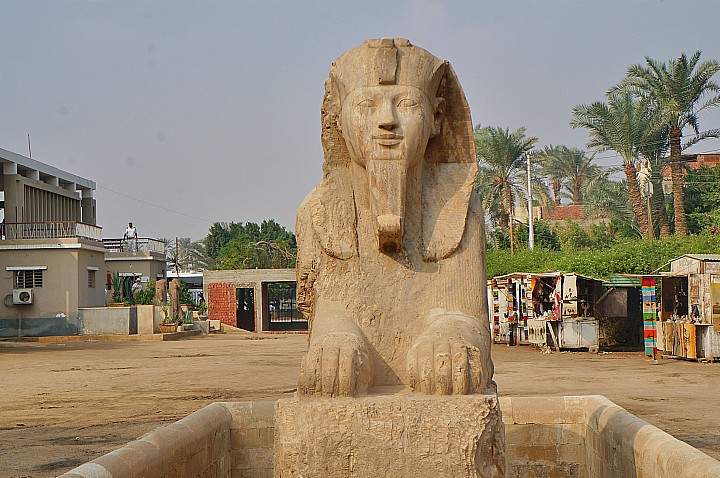 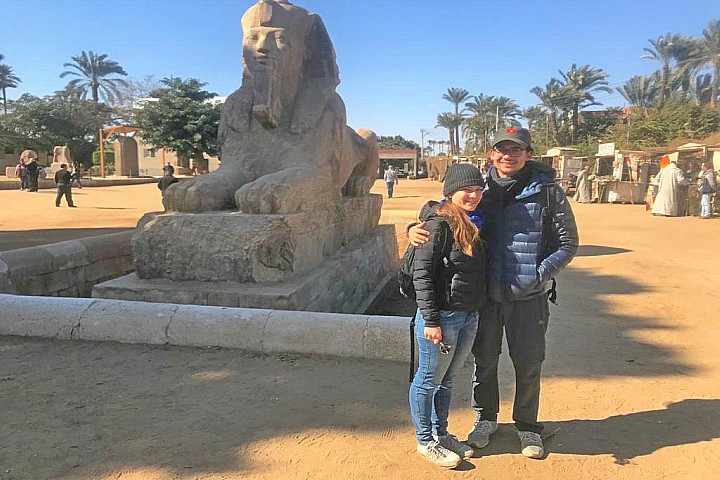 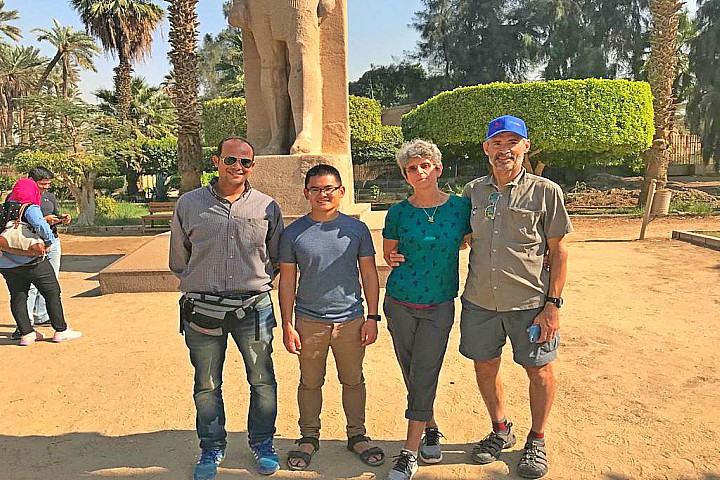 Discover the monument that was built 200 years before the building of the great pyramid of King Cheops in Giza, Saqqara Step Pyramid of King Djoser and the most ancient capital of Egypt during the old kingdom 4800 years ago with this Saqqara and Memphis tour from the Airport.

Saqqara and Memphis tour from the Airport

Our representative from Cairo Top Tours will meet you anywhere in Cairo or Giza to accompany you through your Cairo day tour to visit Saqqara and Memphis city, start with Memphis, the oldest ever capital of Egypt which was the center for the government which controlled upper and lower Egypt since the early dynastic period after the unification of the two lands of upper and lower Egypt took place, the city has ruins of artifacts that are displayed in the open-air museum, you will see the statue of Ramses II, the famous pharaoh from the new kingdom along with the alabaster Sphinx which is much smaller than the Great Sphinx of Giza, and other interesting artifacts that you will feel like getting back in time of the kings and pharaohs of ancient Egypt.
Continue your Memphis and Saqqara tour from Cairo to visit the most sacred place during the old kingdom of ancient Egyptian history, Saqqara Necropolis which is blessed with the first pyramid to be built entirely out of stone, which is Djoser's Step Pyramid that was built for king Zoser who ruled Egypt during the 3rd dynasty, the pyramid is built by the method of putting 6 steps (mastabas) above each other in which the burial is underneath, along with one of the two tombs of the nobles at Saqqara, built for one of the husbands of the king's two daughters, inside, you will see the most well-preserved wall paintings depicting the ancient Egyptians daily-life scenes like the offerings for the Gods of ancient Egypt, Egypt's animals used for food, and hunting scenes that still retain their original colors.

You will have a yummy lunch at Saqqara in a good quality restaurant before being transferred back to your hotel or any other drop-off location after you enjoyed our Egypt day tours. 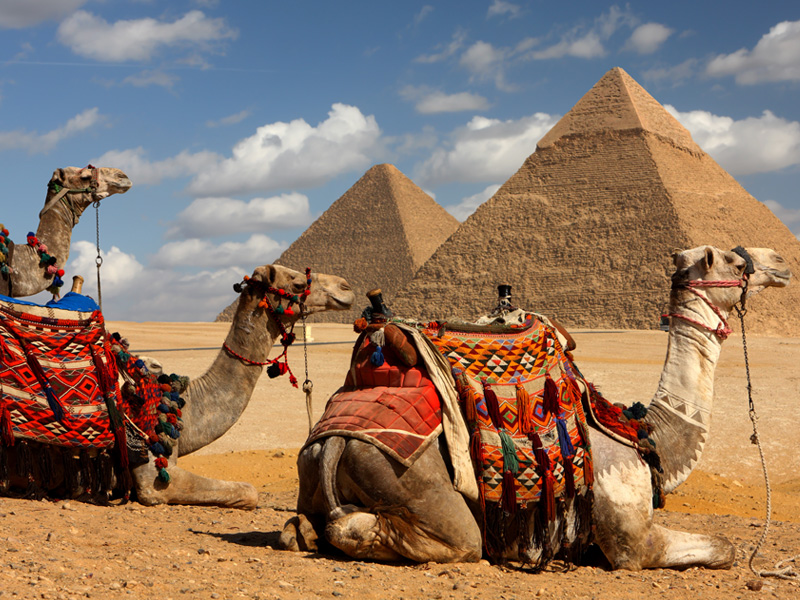 Kill your time at the airport during your transit through Cairo day tours from Cairo airport, you can book you Cairo layover tour anytime, even one day before your transit and we will take you to visit the great pyramids of Giza and great sphinx, the Egyptian Museum and Khan el Khalili bazaar during your layover in Cairo. 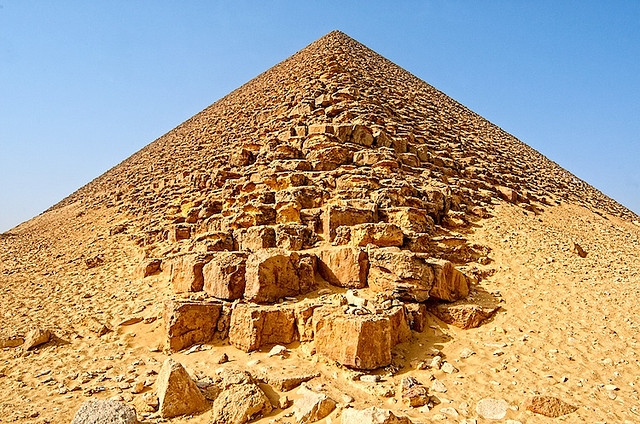 Take the chance now to explore Egypt and learn more about the ancient history of the country during the old kingdom through visiting the great pyramids of Giza and the sphinx, Memphis the oldest capital of Egypt, and the step pyramid of king Djoser in Sakkara. You can leave Cairo international airport during your transit hours and come to explore the highlights of Egypt during your Cairo layover tour and enjoy visiting the pyramids of Giza, the sphinx, the Egyptian Museum, Coptic Cairo and Khan el Khalili bazaar. 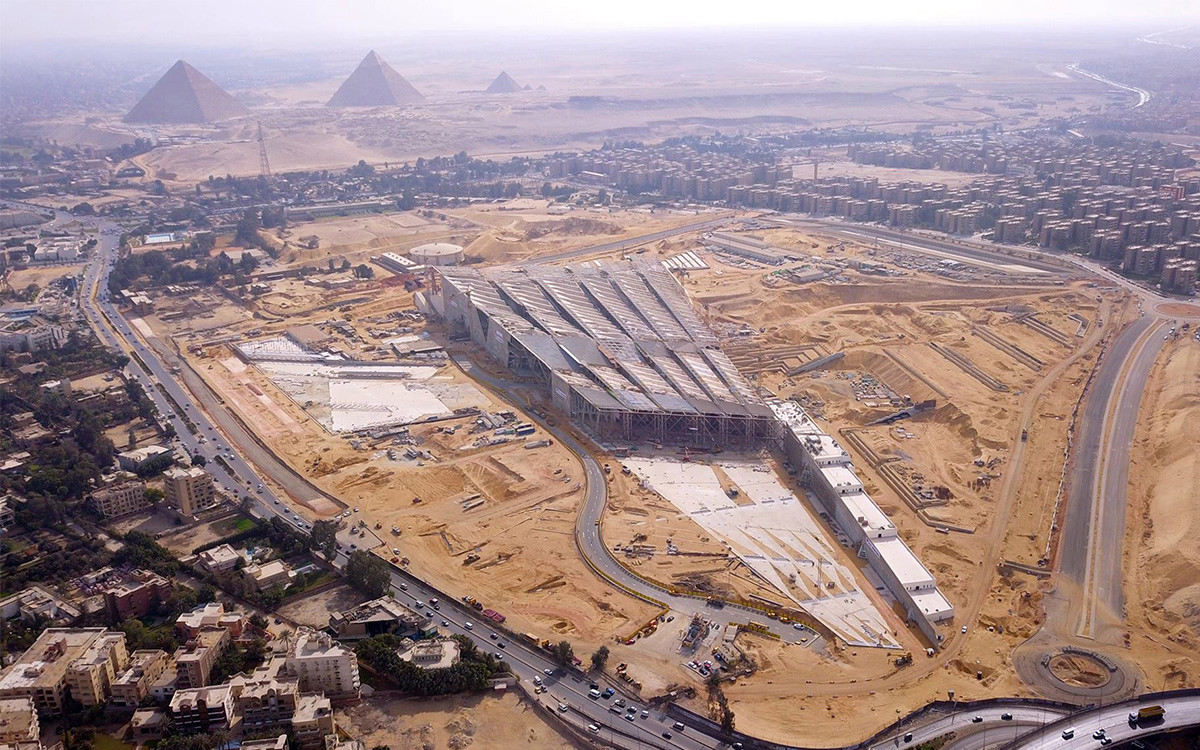 Take the advantage of the opportunity and experience our Cairo Stopover Tour to visit the Grand Egyptian Museum and the great Giza Pyramids, and be one of the first visitors who come to Egypt especially to see the new museum. 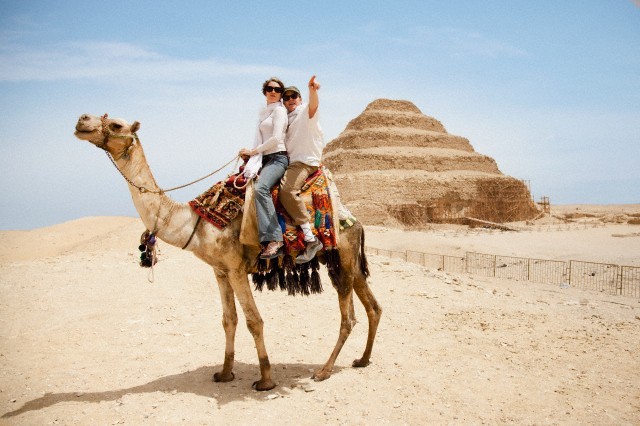 Dedicate your free time at Cairo airport to see the great history of the pyramids of Egypt through Tour from Cairo airport to Giza Pyramids, Sphinx Memphis, Saqqara, and Dahshur, the the the three great pyramids of kings Cheops, Chephren, and Mycerinus and also the step pyramid in Sakkara and more pyramids in Dahsure area, in addition, the open-air museum in Memphis. 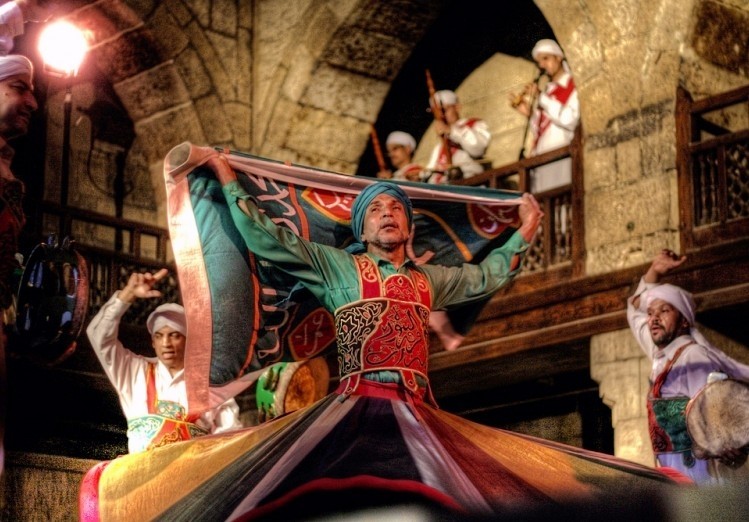 If you're one of those who love the exotic cultures so this is your moment to get to know about the Egyptian folklore during your Cairo layover tours and book Wekalet El Ghouri Dance Show and enjoy Tannoura Egyptian folk dance show. 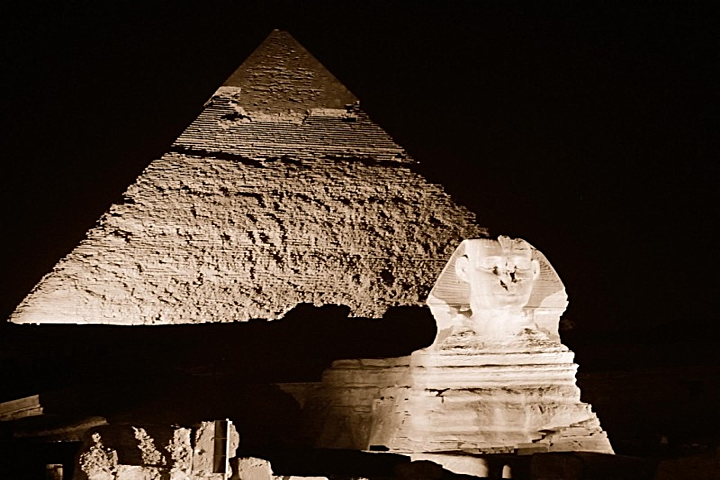 Discover the history of the most ancient civilization on Earth, Egypt, the land of the Pharaohs by booking this marvelous Sound and Light Show at Giza Pyramids from Cairo airport while you have a Layover from Cairo Airport. You will be amazed by the Lazer-data show that being spoken by the Great Sphinx to tell the secrets of this sacred Giza Pyramids Plateau and how Pyramids were built. Enjoy visiting the famous fortress or the well-known as Saladin Citadel and Mohamed Ali Alabaster Mosque with our choice of Islamic Cairo Tours and Cairo Day Tours from the airport. Visit the Mosque of Ahmed Ibn Tulun, Sultan Hassan's Mosque, Al Rifa'i Mosque, and time-travel to the Medieval times in Khan E-Khalili Bazaar during your Islamic Cairo Layover Tour from Airport. Enjoy the most exciting of all Tours in Egypt, the Giza Pyramids through this Giza Pyramids Half-Day Tour from Airport. Giza Pyramids Stopover Tour offers you with a once in a lifetime adventure and amongst the best things to do in Cairo, Egypt. Experience one of our most recommended Coptic Cairo Tours from Airport to visit the monuments in the range of Coptic Cairo, known as Old Cairo which had been honored by the residence of the Coptic Holy Family during their trip while escaping from the persecution at the old Coptic past. Visit the Hanging Church of the Holy Virgin Mary, the Synagogue of Ben Ezra and the Coptic Museum.

Egypt has filled in as truly outstanding and most secure traveler goals for quite a long time. Encompassed by warm Egyptian friendliness, considerate and kind-hearted local people you're going to feel comfortable and as sheltered as you'll ever be. With some Sensible precautionary measures and arrangements, you will have the option to investigate Egypt visits and trips and make the most of Egypt's commonly exceptionally safe urban communities without any difficulty. Flaunting a generally low crime percentage guests will be more than safe particularly in territories every now and again visited by travelers. Generally, it is safe to travel to egypt for vacation where there are outrageous techniques for security, for example, check focuses at each vacation spots, shopping center, museum and so on.

WHAT CAN FEMALE TOURISTS WEAR IN EGYPT ?

The clothing standard in Egypt for ladies is viewed as traditionalist by western gauges and it is aware to comply with this code. For men it isn't generally an issue - typical pants and shirt or T-shirt are fine - however in Cairo it would not be satisfactory to wear short shorts or a tank tops/sleeveless tops.